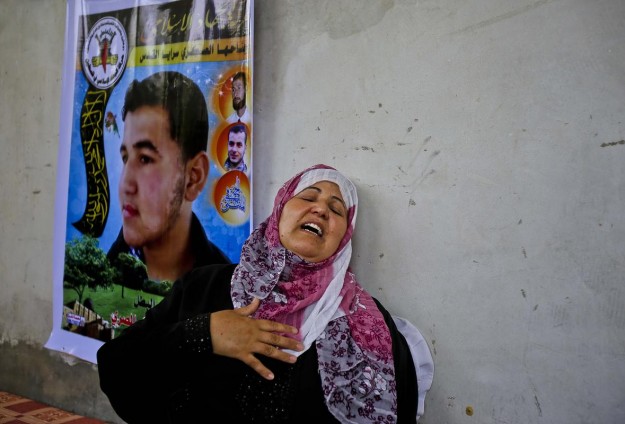 More than one year after Israel pulverized the besieged Gaza Strip, the pain is not over for the Omran family who are still searching for their son Noor, desperate to find out whether he is dead or alive.

Even though it has been many months since the 17-year-old went missing, his family has not given up.

“Noor left the house in the morning and headed to work in a poultry farm in the borderline al-Qarara area in Khan Yunis city,” his mother told Anadolu Agency. “He did not know that the area was under a ground invasion by the Israeli army that night.”

The last person to have seen Noor told his mother he had entered the middle of the ground invasion and stopped his motorcycle, which he was riding near the farm, and then disappeared.

His mother is in great pain, not knowing whether her son is dead or alive.

« The war has ended for inhabitants of the Strip, except in my family’s home, » Mutasim, Noor’s brother, told Anadolu Agency. « We do not know if he is alive inside the Israeli prisons or if he was martyred and the [Israeli] army has withheld his corpse. »

Mutasim said he started communicating with local and international human rights organizations to search for his brother inside Israeli prisons, after he found no clues leading to his corpse.

He said that Al Mezan Center for Human Rights in Gaza assigned a lawyer to search for his brother inside Israeli jails, or between the corpses held by Israel, but the Israeli prison authorities « refused to give any information with regards to this case. »

Israeli authorities are not always hiding the fates of Palestinians who went missing during the war, because the family of Hatem Abu Reida, 25, was informed that their son was detained in an Israeli prison.

Hatem’s mother, Asma abu Reida told Anadolu Agency: « Late in July 2014, the Israeli army entered with its artillery and military machinery into the borderline town of Khuzaa, Khan Yunis. They detained a number of young men in the town. Some were set free after days of detainment and some remained in the hands of the [Israeli] army. »

Abu Reida added that Israel had charged her son with « belonging to the Islamic Jihad Movement and he was sentenced accordingly to 7.5 years in jail. »

The Palestinian Ministry of Interior and the International Committee of the Red Cross have not issued any statistics regarding the number of people who went missing during the war.

Mirfet al-Nahal, head of the Legal Aid Unit at Al Mezan Center for Human Rights, said the center communicated with a number of families who had lost sons during the war and received official powers of attorney from them to legally pursue the fates of their sons on the Israeli side.

She said that the center’s research found 24 missing individuals alive inside Israeli prisons, while five other cases remain unknown.

Israel has refused to provide any information regarding these five cases, she said, adding: « The fate of those [five] is unknown. »

Al-Nahal said their research “has not recorded all those who went missing during the war, but was preliminary [information] that the center was able to reach and record. There are others who have not been mentioned and we could not reach the families to get powers of attorney from them. »

Last July, Israel waged war on the Gaza strip, killing more than 2,000 Palestinians and injuring another 11,000, according to the Palestinian Health Ministry.

No official data has been issued by Israel regarding the number of those detained in Gaza during the war, or the numbers of dead Palestinian bodies it holds.